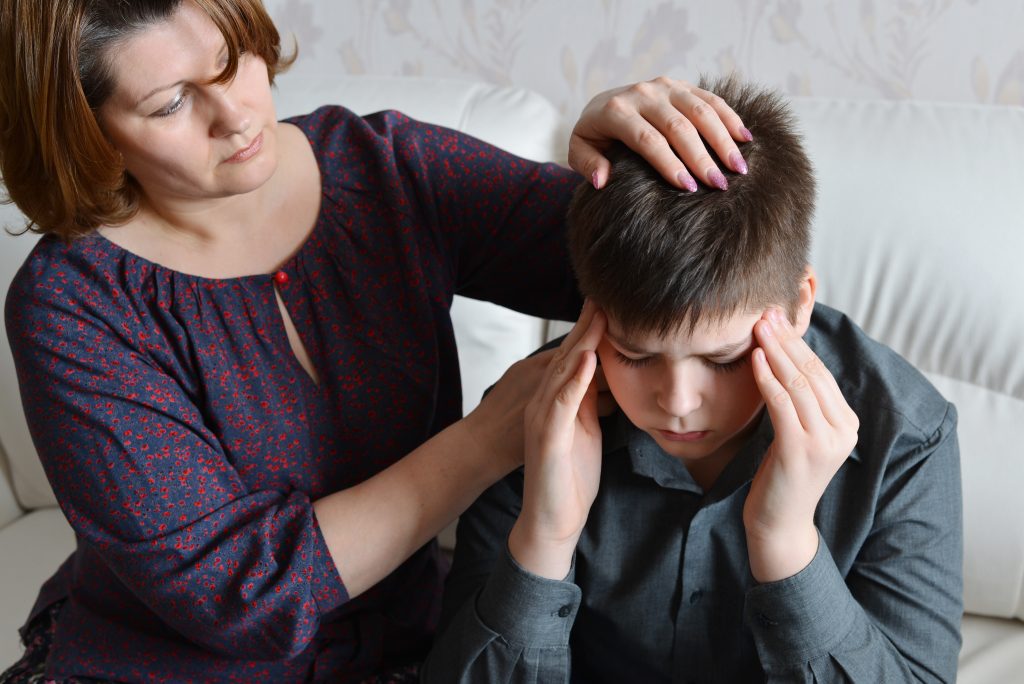 29 Jul5 Ways Migraines May Be Affecting Your Kids

If you suffer from chronic migraines and headaches, you know that the symptoms are no joke.

While migraines are primarily known for affecting adults, about 30% of teens (and children) suffer from them as well. Migraines differ from headaches in that they are much more severe, and often accompanied by other symptoms such as nausea, head throbbing, light sensitivity, and more.

So can’t this all be fixed with a quick dosage of painkillers? Not necessarily. Migraines can be just as debilitating for children as they can be for adults, with the worst cases affecting their academic performance, relationships, and even their own sense of self-worth. Let’s take a look at 5 ways adolescent migraines might be affecting your kids’ health.

While we don’t know all the technicalities of what causes migraines on a neurological level, most scientists believe that they are the result of abnormal brain functioning, affecting your brain’s nerve signals, possibly the ones that regulate pain.

What we can tell, however, is there are certain triggers that seem to be common amongst migraine sufferers. These can include stress, dehydration, skipping meals, caffeine withdrawals (or too much caffeine), certain foods, even weather changes.

If you suspect your child might be suffering from migraines, and not merely headaches, keep an eye out for possible triggers like these.

1- The Ugly Side: Nausea & Vomiting

Some of the most severe of migraine symptoms include nausea and vomiting. Often this is due to a sensitivity to light, certain sounds, or smells that trigger a sick response from their body. It’s important to note that nausea and vomiting can occur even without these triggers.

Between feeling ill from accompanying symptoms (like nausea, vomiting, and restless sleep), and the sheer pain of the migraine itself, you might find your child beginning to make themselves scarce. They might come home from school only to lie down for the evening to ease their pain, and avoid certain lights and sounds.

This can have dire consequences on their relationships and academic performance. For example, children with migraines are twice as likely to be absent from school due to symptoms. They may also skip out on time with friends because of existing chronic migraine pain, or worry that an attack might hit them while they’re socializing.

3- They Have Anticipatory Anxiety (& Depression)

Those who suffer from migraines are also more likely to struggle with their mental health, particularly with anxiety and depression. Many kids and teens with chronic migraines live in fear that they will experience a migraine attack at any time, disrupting their day’s plans and ability to do their work or hang out with friends and family.

If this becomes the case, this anticipatory anxiety can soon be accompanied by depression as they become more isolated due to their illness.

4- Difficulty Concentrating Is An Everyday Occurrence

Another reason that kids with frequent migraines can suffer in school is concentration difficulties. This may be due to trying to work while experiencing a migraine itself, while worrying about an oncoming attack, or perhaps even because they are just having trouble sleeping (another common migraine symptom).

5- They Have A Little Bit Too Much Teen Angst

One of the most common of migraine symptoms in teens is irritability and moodiness. In fact, about 60% of people who experience migraines also experience mood swings before or after the attack. These mood changes can be composed of hyperactivity, difficulty concentrating or thinking straight, depression, anxiety, or even feelings of cheeriness (before the attack hits).

Unfortunately, many of these symptoms are also just part of being a teenager. That’s why it’s important to keep open communication with your child一 if you start to notice that they’re often having headaches or feeling ill, it’s time to talk to a doctor.

At Olympian Clinical Research, we know how debilitating chronic migraines in children and teenagers can be for their development. That’s why we are working with the greater scientific community to help patients find relief. If your child suffers from migraines, keep an eye out for our upcoming study on Adolescent Migraines一 it could be just the relief they need!

Contact our office to be signed up to learn more information!